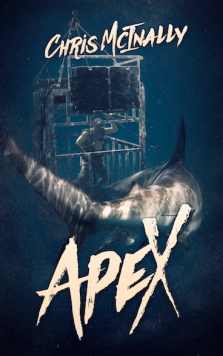 On the very first page of Chris McInally’s novel, a thousand pound, 35-foot mako shark begins chomping on unlucky bastards living near Minerva Lake. But it takes the author a long time to figure out what to call the “watery demon from the deepest layers of hell.”

Torpedo-shaped predator, top-of-the-line predator, marauding predator and wandering predator are just a few of the euphemisms the author uses. He even calls the shark a brute, a bitch and a bloodthirsty fucker. Finally, in chapter eight, McInally hits gold. He describes the mako as an apex predator—and voilà! a star is born.

But why is an apex predator prowling a shallow lake instead of swimming with sharks in the ocean? McInally’s got the answer. “The extent and impact of environmental degradation upon Minerva Lake was astounding,” he writes. “The lake’s natural balance had irreversibly changed. Over the course of 200 years, it had transitioned from a freshwater environment to a quasi-marine habitat.”

The level of anthropogenic degeneracy was now snowballing at an exponential rate due to increased agricultural demands. A whole new food web had developed in the lake, and the shortfin mako shark found itself at the top of the food chain. It was a big fish in a small pond.

There was only one problem, however. The hungry shark couldn’t sustain itself on crayfish, bluefish and pufferfish. It needed a higher caloric intake. To survive, it started attacking cows and fat humans.

For the next 134 pages, everybody who ventures into Minerva Lake becomes a tasty treat on the mako’s dining menu. Fishermen, farmers, tourists, skinny dippers, college research assistants and police officers all meet a horrible and ultra-violent death. It’s like the plot of some Z-grade horror movie, says Dr. Hailey Benson at one point.

As it turns out, Dr. Benson has a plan to capture the shark and release it into the ocean. “It’s about doing what’s right,” she explains. “Human manipulation of the environment brought about this horrific aberration. That means it’s up to us to solve the problem. Someone has to take ownership of this mess.”

It shouldn’t surprise anyone that Dr. Benson’s humane agenda backfires in the messiest way imaginable. She only succeeds in agitating the shark to an insane level. When she finally comes face to face with the mako’s toothy grin, she changes her tune immediately. “Killing it would be a mercy,” she cries. “It’s mad with hunger and blood lust.”

Final verdict: Apex is a thin book—maybe too thin—but it has a cinematic quality to it. I wouldn’t be surprised to discover that it was originally a screenplay. Also: there are a couple of quirky characters worth mentioning. The scrawny deputy sheriff is a badass like Barney Fife. And Demi, the militant animal rights advocate, is a brooding presence throughout the book. The inscrutable shark, however, is the star of the show. Despite the unrelenting carnage, Dr. Benson had to admit: “The mako was beautiful in a terrifying sort of way.”