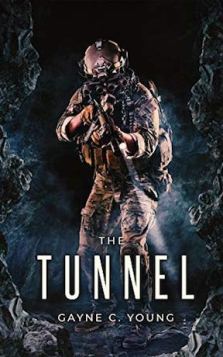 Things are so fucked up that cartels and coyotes are now digging tunnels from one country to the other. In theory, these subterranean passageways make it easier to sidestep ICE agents and border patrol hassles. A tunnel is especially convenient for Central and South American drug syndicates looking for a way to get their contraband into the hands of their loyal customers. If you didn’t know, the U.S. is the largest market for recreational drugs in the world. Go team!

In this novel by Gayne C. Young there’s a tunnel in progress linking “a nondescript ranch house in Mexico to a nondescript ranch house in Texas.” It’s a big commitment for the Acuña Cartel, but it’s worth every penny. “The tunnel is a sizable investment,” admits Miguel Alvarado, a high-ranking official in the organization, “but it will earn 400-to-500 times its cost once the first shipment of fentanyl makes it across the border.”

And that’s why the cartel is upset when a mysterious incident abruptly stops construction. Each day a delivery truck doesn’t drive through the underground freeway represents a loss of tens of millions of dollars. Jeff Hunter and Jarrett Taylor, two Afghanistan War veterans now employed by the drug mob, are immediately dispatched to the site. Along with an alpha team of mercenaries, their mission is to clean up the situation using any means necessary.

Initially, Hunter thinks that a rival gang is responsible for the narco tunnel mishap. Or perhaps it’s the result of overzealous immigration agents. But he’s wrong. Some type of monstrous creature is obviously attacking the diggers. Says the author: “The bodies were mutilated beyond recognition and resembled caricatures of human forms as if fashioned from a fevered dream or by evil itself. The tunnel floor was littered with dried blood, viscera and torn earth that told of struggle and carnage.”

You have to wonder: What type of animal is responsible for such slaughter? Dogs? Hyenas? Jaguars? How about a vampire-like chupacabra or a mythical jackalope? Maybe a troop of invasive Japanese snow monkeys? That’s the best (and funniest) theory.

For the record, the author never reveals what kind of monsters are down in the dig dug tunnel. He does, eventually, provide a pretty good description of them, however: “The animals resembled baboons except for the eyes, which appeared three to four times larger than they should have been on similar animals of size. Their eyes were coal black and void of pupils. Their fur was dirty white and course. Their claws were elongated, razor sharp and pale ivory in color.”

The novel ends with a couple of burning questions: Why are these troglobites attacking people? And why did the mere presence of humans whip them into such a frenzy? The answer to both questions is simple. “They liked the taste,” says one of the mercs.